Uckfield Town Centre Regeneration Where does that all come from then?

I have put this together following a resent question posted on the Uckfield Neighbourhood plan Facebook page.
“Can anyone shed any light on the proposed developments for the Holy Cross School/Luxford playing field? Did anyone see the original plans?”
I have also been confused by this as there have been a number of proposals and consultations about various options. I don’t want to add to any confusion and would like to state from the start that the plans mentioned in this were all proposed but only the traffic options a, and b, have been accepted. That is not to say that a previously considered option will not be reconsidered.
Here is a timeline of how the town centre regeneration project has come about.
In 2007 a Town Centre Masterplan was drawn up that included various ideas and proposals for the town centre. This working document was then included within Wealden District council’s Local Development Framework. The document as very broad and suggests a number of possible improvements for the centre of Uckfield. This document formed the initial basis for the Town Centre Regeneration steering group. Their remit is to work with the three local councils (East Sussex County, Wealden District and Uckfield Town) and, local landowners and businesses to begin delivering the benefits identified within the masterplan.
In 2008 Tesco hired a company called St James Investments to design a regenerated town centre that included a much larger Tesco store. The plan was to raise the store at the Bell Farm end with parking below. It included so 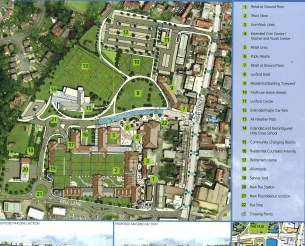 me extra small retail and quite a lot of residential properties within the plan. It also included access to civic approach via the roundabout on Bell Lane. (Tesco Roundabout). Although this plan was based loosely around the Masterplan it was a speculative proposal. At the time Tesco were doing very well and had already built some of these large “Tesco Town” type developments in other places. Tesco’s expansion across the country led to sites like http://www.tescopoly.org/ offering help on fighting their proposals. However there was a sudden downturn in Tesco’s fortunes. The growth of Morrison’s and discounters like Lidl and Aldi as well as a change in shopping habits from large supermarkets to convenience stores brought Tesco’s expansion to a sudden halt. I don’t believe that a planning application was submitted.
On 4 years to 2012. East Sussex county council, in reaction to a Local area transport study, put forward proposals to improve traffic flow within Uckfield. This consultation is solely about traffic and is not concerned with retail space or other developments. The proposals were:
a) Smarter Choices – Improvements to facilities for pedestrians, public transport and cyclists.
b) Station Car park – Building a commuter car park on the old station site to increase availability of parking within the town.

c) Northern Road – A relief road linking Bell Farm Road (at the allotments) to Civic approach. This would potentially reduce congestion at the bottleneck at the traffic lights. This runs between the school and the Fire station so both would remain.
d) Southern Road – A relief road linking Framfield Road to Bell Farm Road at the Tesco roundabout. This was proposed in two stages. Firstly to put the road in then to raise it above the railway track if the line to Lewes is reopened.

Public opinion favoured options a, and b, with the road options getting a little support.
A further public consultation on more detailed proposals for options a, and b, was carried out if 2013. In the end East Sussex decided to go ahead with the first two options. The railway car park is already complete and option a, is the current works including the improvements to the High Street and Bus Station. I suspect that the other options were too expensive to implement without the potential investment in infrastructure that would have been gained from a wider town centre regeneration project that included some housing and retail expansion.
The Uckfield Town centre regeneration steering group have now renamed as “Uckfield Town Centre Reinvestment Project”. There was a draft proposal, not specific plans but a wish list, put out for tender to try to get a potential investor. The downturn in the economy at the time and the changes in supermarket shopping coupled with the development restrictions imposed by the protection of the Ashdown Forest made the regeneration uneconomic and no suitable developers or investors came forward. In November 2015 the TCR carried out a further public consultation to ensure that the residents were still in favour of the ideas from their previous consultations. As far as I know the regeneration is on hold and being reviewed and is likely to remain that way until and investor steps forward.

Currently there are no specific plans beyond the current highways work and the only plan as such is a map that shows the potential land that may be used.
Information about the current status of the project and the potential development area can be found on their web site: http://www.uckfieldtc.gov.uk/Town-Centre-Reinvestment-Project.aspx

To reinterate, and as far as I am aware, at the time of writing (22/07/2016) there are no fixed plans for the redevelopment of land in the town centre. Only a list of aspirations and a map of a potential development site.